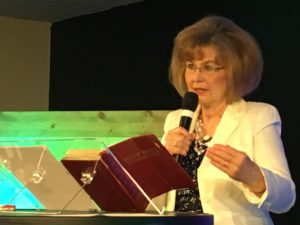 Harley L. Kolterman is the founder of My Father’s House, Inc. which he has co-pastored with his wife, Karen, since 1995.

Shortly after making Jesus the Lord of his life in Elkhart, IN, Pastor Kolterman began preaching at a Main Street storefront mission. His first missions outreach was to Cairo, Egypt in 1980. Influenced by Word of Faith teachers Kenneth E. Hagin, Kenneth Copeland, Charles Capps and Marilyn Hickey, he taught the Word with tent crusade evangelists to the Navajos and began broadcasting a Gospel program called “Success” on FM and international shortwave radio on the LeSea network. He pastored Word of Faith churches for several years in the North Judson, IN area before joining Dr. Lester Sumrall’s ministry in 1983. In various capacities, Pastor Kolterman has since traveled to more than 50 nations, teaching, preaching, feeding the poor and hungry, and administrating the work of God.

Pastor Kolterman served thirteen years in the ministry with Dr. Lester Sumrall, and eight years as the first World Operations Director of LeSEA Global Feed the Hungry. From its inception in 1987, Feed the Hungry grew into a global relief outreach distributing more than $20,000,000 worth of food and other aid annually. Pastor Kolterman holds credentials with Provident Ministries International, Ltd. and is a member in good standing of Provident Ministerial Network.

Pastors Santos & Sara were ordained into the ministry as associate pastors in January 2022.

In 2006 Pastor Santos joined My Father’s House and later began to learn and grow as a leader under the covering of Pastor Harley Kolterman. He enjoys discipling men through cell group, and has a passion to train up children and adults in the ways of the Lord. Pastor Santos dreams big and has gifting in the area of faith and finances.

Pastor Sara accepted Jesus into her life in 2003 while serving as a volunteer teacher on the Navajo Indian Reservation. A few years later she enrolled in Youth with a Mission’s Discipleship Training School in Buenos Aires, Argentina. Sensing the call to full time missionary service, Pastor Sara lived and served with YWAM for a total of 7 years, which were of significant spiritual growth. It is there that Pastor Sara developed her love for the nations, ministering the Word of God both from the pulpit and to people personally in unique settings such as underprivileged neighborhoods. The Lord brought Pastor Sara to My Father’s House in 2013 where she has grown into leadership.

Pastors Santos & Sara have experienced the faithfulness of the Lord in their journey and are looking forward to all that He has in the future. They have a heart for people of diverse cultures and both speak Spanish. Pastors Santos & Sara enjoy partnering with the Lord to see the gospel preached and the Kingdom of God expanded. They are excited to carry on the vision that the Lord entrusted to pastors Harley & Karen Kolterman to raise up influential disciple makers in this end-times army.