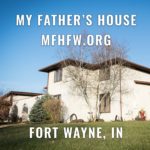 My Father's House
The Incarnation

Why would God become a man? For many centuries now, Christians have considered the incarnation as the bedrock of the Christian faith. The Word became flesh and dwelt among us, as the apostle John described it. The Passion Version translates it this way, “And so the Living Expression became a man and lived among us!” (John 1:14) Today our hope is that you will allow Jesus, the one also called Emmanuel—God with us, fill you with His Glory, His Grace, and His Truth—allowing Him to become “Christ in you the hope of glory.” (Colossians 1:27)